Deontofi.com mostly publishes articles in French but we would be very happy to share our information with international readers. Some stories written in English are gathered here and others can be provided on demand, from existing French material, or produced on purpose for specific inquiries, upon request.

It will take decades before the world political and business leaders agree on broad and more comparable eco-accounting standards, just like it took decades to build the US GAAP (Generally Accepted Accounting Principles) and the International Accounting Standards adopted by many other countries, before their convergence through the International Financial Reporting Standards (IFRS)

The property market is in a spin, and investors can’t get enough of it 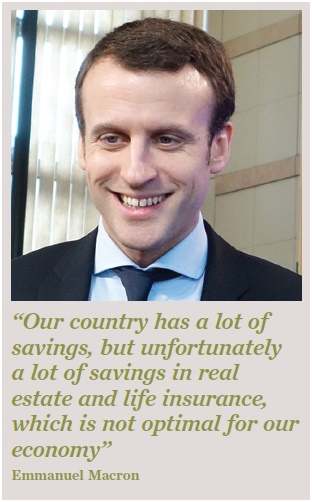 SME Lending: Finance funds for business May 2016 (Magazine) By Gilles Pouzin. • The government is supporting a new fund designed to funnel institutional assets to small and medium-sized enterprises. • Until recently lending in France was restricted to banks and credit institutions. • Institutional investors are increasingly investing in loans.

France’s first-pillar pensions: Embracing the last resort May 2016 (Magazine) By Gilles Pouzin. • The recent Agirc-Arrco agreement was designed to overhaul the second-pillar pensions scheme. • From 2019, there will be a 10% cut in pension payouts during the first three years of retirement, even for those with a complete record of contributions (43 years). • The Agirc scheme for executives will merge with the employees’ Arrco scheme in a new unified regime by 2019.

Agirc-Arrco: Opening closed shops May 2015 (Magazine) By Gilles Pouzin. Restructuring the supplementary pension schemes will see greater centralised management and the increased use of passive strategies.

Agirc-Arrco reviews strategy ahead of expected fund manager reshuffle 14 October 2014 By Gilles Pouzin. French second-pillar pension fund Agirc-Arrco has reviewed its investment strategy ahead of a likely asset-management reshuffle, as economic and demographic constrains weight on retirement. Agirc-Arrco’s financial committee is set to review the findings…

Second-pillar reserves to dry up at France’s Agirc despite reforms Mon, 16 Dec 2013 By Gilles Pouzin

France: The impact of a shorter horizon May 2011 (Magazine) Gilles Pouzin (under pen name Alain Lemoine) makes a gloomy assessment of the wider impact on French pensions reform and funding of the decision to drawdown on FRR …

France: Reforms on the starting line May 2010 (Magazine) Reform to the French social system is less politically unacceptable than it was a few years ago, writes Alain Lemoine …

Strauss-Kahn in pensions drive March 1999 (Magazine)France will have an ‘appropriate’ retirement funding system by the turn of the century, which will contribute to the ‘mobilisation’ of national saving and the defence of French business, Domique Strauss-Kahn,…

Euroland won’t be built in a day February 1999 (Magazine) The whole Euroland bond market is worth an estimated E6trn (the US is $11trn) and France is only 24% of that pool, but this doesn’t mean that French institutions are rushing to re-allocate 76% of their bond…

Promise in the east December 1998 (Magazine) Charles Brady, chairman of Amvescap, talks to Gilles Pouzin What is your strategy in Europe? We have $260bn under management, of which $50bn is managed for international clients, essentially in Europe. It’s still a minority…

Managers steady as volatility hits FRANCE November 1998 (Magazine) The summer market storms are becoming more and more seasonal, but nevertheless, they still take everybody by surprise. Even the money managers, who have many options to hedge their investments…

« Pension funds, trap to idiots », reads a poster in a French demonstration against Pay-As-You-Go retirement reform, in Paris (photo © GPouzin).

French talks to resume September 1997 (Magazine) After being elected on the promise of scrapping right-wing liberal reforms, the French socialists are softly shifting to a more pragmatic stance. The privatisation process is the first illustration of this, but the pension…

Thomas law to die – long live reform July 1997 (Magazine) That the tangled birth of French pension funds could be heading for a miscarriage is the most common fear amongst market watchers after the socialists won the French general election. The Thomas law – named after…

The tangled birth of the French pension fund system April 1997 (Magazine) The new law has passed most legal hurdles, but is the demand really there? Gilles Pouzin reports. Social unrest has not stopped the introduction of France’s new private retirement system, but the…

Note to foreign editors : interested in these stories, please contact the author if you want an original script of these hearings in Paris court, as Mr Bronfman spoke in English, and the French articles are based on the author’s translation of his English written notes. Translating from French back to English entails a risk of confusion with the original words.