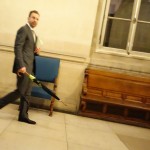 English summary : The French article describes the environment in wich Edgar Bronfman Jr exercised some expiring stock options he had been granted as Seagram CEO, 9 and 10 years before his resignation of the newly merged Vivendi Universal group, back in late 2001 and early 2002.